We are proud to offer Mens and Vets rugby for players from 18-years old, to ‘seasoned campaigners’ aged 35 to 50+, all are welcome at ‘Canes’.

Our squad comprises of players from both the Northern and Southern hemisphere and a broad spectrum of rugby experiences, ranging from traditional club rugby to elite level.  With senior Men’s teams competing in the West Asia league, UAE Premiership and Division-1 throughout the year, we at Dubai Hurricanes take a professional approach to training and competition, whilst having fun along the way.

We actively participate in the Dubai7s, fielding as many sides as possible for the event – and are the current Gulf Men’s (and Women’s) league champions, having retained the title in 2019.

Each year a number of our players have been select to represent the Club in the UAE national team which plays in the Asia 5 Nations Cup.

As the flagship squad of the club, and with the aim of providing the best rugby experience in Dubai, our senior players enjoy a professional approach to training and match days with planned training sessions, dedicated physiotherapy support, and video match analysis to help develop our game. This is further enhanced with our affiliation with the Hurricanes’ Super Rugby franchise, based in Wellington New Zealand.

Off the pitch, we enjoy great camaraderie with an active social scene – underpinned by a strong business network that can help members develop their career in Dubai. 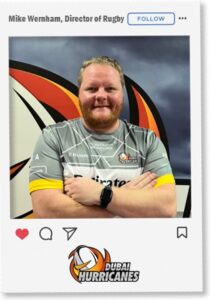