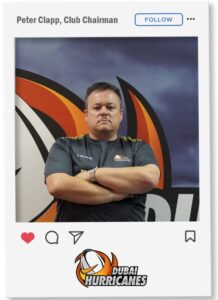 Peter joined Dubai Hurricanes as a coach in the ‘Minis’ during 2012 before taking on the role of Mini & Youth Chairman (and Tournament Director of HSBC Rugby Festival) from 2015 – later acting as Vice Chairman (from 2017) and Club Chairman from the beginning of the 2020-21 season.  Peter remains an active coach, squad manager and Touch player, former Chairman of the UAE Rugby Mini & Youth Committee, and member of the UAE Rugby Club Consortium working group.

Professionally he is Vice President (Operations Director) of Parsons Corporation in the Middle East & Africa; He was previously the head of Project Excellence and Controls, sat on Parsons’ cross Business-Unit ‘Leadership Council’ and acted as a major Programme Director. Pete begun his career with BAE Systems in the UK and has been with Parsons MEA since 2011.